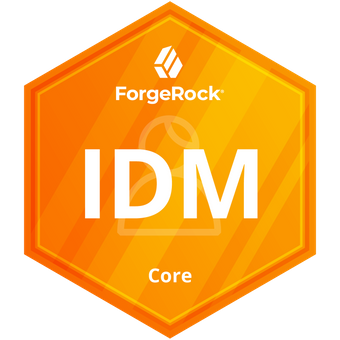 Learn how to install and deploy ForgeRock® Identity Management (IDM) in an on-prem or self-managed cloud environment to manage the lifecycle and relationship of digital identities. Topics include how to model identity objects in IDM, create connector configurations and synchronization mappings to manage the flow identity objects and properties with various external identity resources, manage workflows, and deploy IDM within a cluster. This course explores the identity management-related features in depth, how they work, and the configuration options available during implementation.

Note: Revision B of this course is based on version 7.2 of IDM.

The target audiences for this course include:

Upon completion of this course, you should be able to:

The following are the prerequisites for successfully completing this course:

Model identity objects, their identity properties, and the relationships between objects, onto existing or new managed objects within IDM.

Learn about the different object types in IDM, and how you can model a custom identity profile onto a managed object in IDM:

Use the IDM REST interface to query IDM objects:

Create and manage the relationship between managed objects:

Set up managed organizations to delegate user administration based on the owner of hierarchical trees:

Delegate the administrative privileges to a group of managed users for managing end user identities in IDM:

Create and configure connections between external resources and IDM.

Create a connector configuration to connect to an external resource using the IDM Admin UI:

Create a connector configuration in IDM over the REST interface:

Describe how to use the IDM Admin UI to create sync mappings to reconcile identities between IDM and an external resource:

Filter objects that are synchronized and automate synchronization using LiveSync:

Automatically provision users to a set of LDAP groups based on role membership:

Chapter 4: Getting Started With Workflow

Use the sample workflows included with IDM to learn how to introduce business logic into the provisioning process.

Lesson 1: Deploying and Starting a Workflow

Enable the workflow engine in IDM and deploy a sample workflow to learn how to manage workflow tasks and processes in the IDM Admin UI, IDM End User UI, and REST interface:

Lesson 2: Deploying and Creating a Workflow

Install and deploy IDM in an on-prem or cloud provider Linux environment.

Install a stand-alone IDM instance for development and testing the IDM sample configurations:

Lesson 2: Deploying IDM in a Cluster

Lesson 3: Managing IDM in a Cluster

Manage IDM in a cluster environment:

Describe how to set up monitoring and perform basic troubleshooting:

Explore the differences between generic and explicit mapping, and implement each in an external ForgeRock® Directory Services (DS) and JDBC repository: