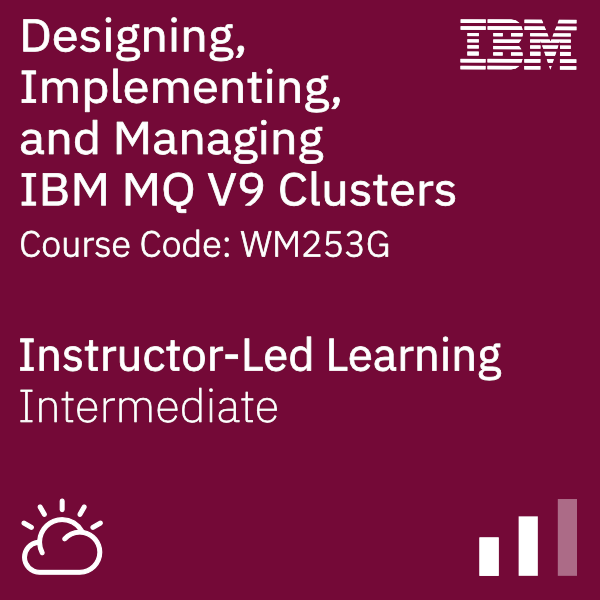 This course prepares you to plan, design, configure, and administer IBM MQ clusters.

After a review of IBM MQ, the course explains the similarities and differences between administration of a cluster and administration of a distributed message IBM MQ environment. You learn cluster specific commands and procedures, and explore the role of a cluster in a highly available IBM MQ infrastructure. You learn how to do a detailed verification of a new cluster configuration, review and identify all resulting components, and troubleshoot problems.

You also learn about cluster administration, workload balancing, security, and use of publish/subscribe clusters. You learn how to recognize when a problem is due to connection authentication, channel authentication, or object authorizations. You also learn about design options such as overlapping clusters and use of clusters with z/OS queue sharing groups. Many of the considerations in this course are based on actual engagement experiences.

This course is designed for IBM MQ administrators, architects, application developers, and other professionals who need to understand the design considerations, architectural role, and implementation of IBM MQ clusters

Before taking this course, you should have experience with IBM MQ or complete one of the following courses:

You should also have working knowledge of the Windows operating system to run the lab exercises.